Look, still more pictures of happy pilots and their flying machines ! All are clickable for full-size.

Einar Ek from nearby Malmö with his formation model. Check out Einar's page ! 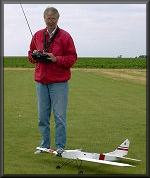 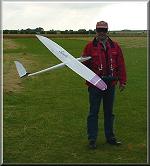 Staffan, your webmaster, visited FOX Manufacturing in Fort Smith, Arkansas, USA, in May 2000. FOX ceased model engines production in 2014 and closed down in 2016. FOX brand and remaining stock and tools purchased by MECOA

Henrik Holmgren, age 13, with his Sportsman 45. Motor OS46. Henrik is just about to complete his R/C school, so by the time you read this he probably has got his R/C certificate ! 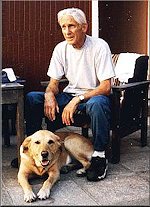 ARNE JÖNSSON AND HIS BOSS

Arne Jönsson, who has done an enormous amount of work on the new club field (together with Knut Stridh), taking a well-earned break. "Boss" is his dog. 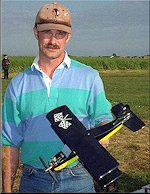 Jacob Moberg, age 16, starting the flight that got him his R/C certificate. Jacob was taken to the TMFK field by his friend Henrik Christoffersson in the autumn of -95. He has been flying since Easter -96, och got his certificate with his own Skyward 40 (motor TT46Pro). Congratulations !

Knut Stridh smiling ,preparing for yet another flight with WellFly. Sports plane is almost completely made from paper, and thus can be recycled !

Your webmaster Staffan Ahlström in a brilliant mood ! Styrofoam plane, HobbyShack Cessna 177 Cardinal, specially imported by son Christoffer, when returning from US visit. (Box tooooo big to be sent by post). Four channels, flew just as good on three, ie. w/o ailerons. Motor OS21FSR. Not really a flying challenge, being a beginner´s ship, but kit cost $25, and Staffan had all the other stuff that was needed...

Ronny Clausen disturbed by the photographer during assembly of his J2. Small and light , motor OS26 4- stroke.

Gathering round the BBQ - give me a thick sausage with everything !

"Hi! We have been out test flying the Spacewalker.. Greetings, Lars and matthias Jeppsson "
Pictures of the air-borne Spacewalker

OK, so they all turn their back towards each other, but they really all have a lot of fun together!

This picture is an ad for the Seaplane page !